alongside the PAME and the resistance of the Greek people 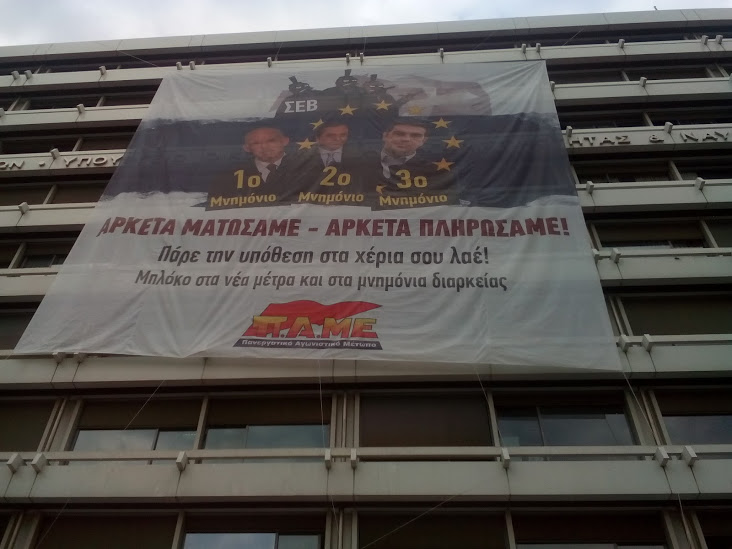 The USB expresses its full support to the Greek workers, to the dozens of trade union organizations of public and private sectors, related to PAME , that today 11 of June, occupied the Greek Ministry of Finance raising the banner:

The recipes contained in the Troika’s memorandum of push toward a further economic strangulation and a more pronounced loss of sovereignty of the Greek people.

The structural reforms imposed by the Troika to the Greek governments have led the Greek public debt from 128% to 178%, destroying the economic and productive fabric of the country and bringing the people to hunger trough to the "structural reforms" and to the cut of the public spending.

The USB salutes the women, the workers, the retired and the young people, that responding to the call of PAME today will participate to massive demonstrations all over the Greece.

The Resistance and the struggle of the Greek people are an example for all the workers in the European continent, in this years of resistance a decisive role has been played by the PAME.

In the middle of the economic crisis and under a formidable attack, through the PAME, thousands of union activists and workers, have actualized the idea of a class oriented trade union, that has to be clearly independent and sharply against by the national and European bourgeoisie.

The USB is convinced that this is the way, the resistance against the Troika can grow only through popular massive struggle, organizing the defense of the general interests of the working class against the cage of the European Union.

Alongside the PAME and the Greek workers on the common path of struggle and solidarity.