WITH THE VENEZUELAN PEOPLE AND THEIR LEGITIMATE GOVERNMENT 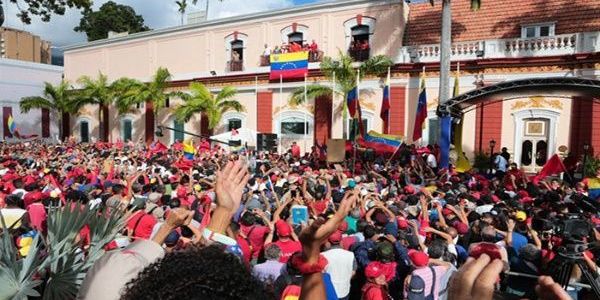 It had been in the air for weeks, accompanied by a global media clamour and a failed coup d'état by a few military personnel, that the United States, the European Union and a few Latin American governments bound by interests in Venezuelan oil will throw a serious challenge to the legitimate government of Venezuela and its legitimate President Nicolas Maduro, confirmed in the recent elections by an overwhelming majority.
On the democracy and transparency of the electoral competition, not even the International Observatories coming from countries that are not friends were able to object.
The self-proclaiming President, the leader of the opposition, Guaidò, who immediately took refuge in the embassy of Colombia in Caracas, is therefore a provocation built at the table to try to start a civil war that is not justified except in the enormous economic and political appetites around a nation rich in oil and that has not bowed to North American and European interests.
The economic strangulation through a real "bloqueo" very similar to what has been imposed against Cuba for decades, the practice of not  let in or taking away food to bend the resistance of the Venezuelan people, together with the blatant support of the U.S. and EU, should have to produce effects at the electoral level that have not occurred.
Today, therefore, they are attempting the charter of the coup d'état.

USB is at the side of those who are struggling to defend their country and their political and economic independence and gives an indication to participate in the unitary initiatives of solidarity and support that will be held in the coming hours in various Italian cities.