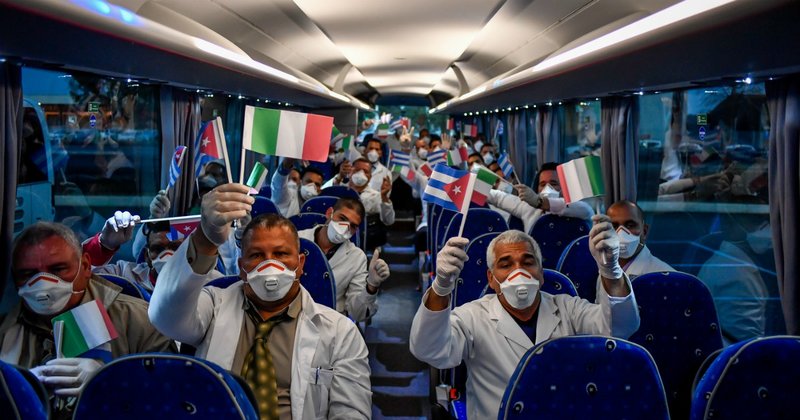 In the darkest days of the pandemic, in Crema and then in Turin, 91 Cuban doctors and health personnel arrived, organized in a Cuban medical brigade "Henry Reeve", highly specialized in the treatment of patients affected by viruses.

The overall commitment of this Brigade during the peak of the virus horn pandemic meant sending more than 1,000 health workers to 18 countries on three continents.

In addition to Italy, Cuban health workers  were  sent to Angola, Togo, Nicaragua, Venezuela, Suriname and Belize. Groups of Cuban health workers have also been sent to many Caribbean countries: among others, Jamaica, Haiti, Saint Lucia, Barbados, Saint Vincent and the Grenadines, Antigua and Barbuda, Dominica, Saint Kitts and Nevis, Granada. All these countries have received a combination of doctors, nurses and technicians.

These professionals are the concrete symbol of the internationalist solidarity of the Cuban people and the Cuban revolutionary government, who have sent highly specialized personnel in situations of catastrophe and epidemics while their country was also struggling with the emergence of the covid infection19, not by chance immediately under control, avoiding the catastrophic impact that is reaping hundreds of thousands of victims in Brazil and many other countries on the Latin American continent.

The Cuban health brigades are well known to many peoples of the world for their selfless and generous efforts in every place where natural or health catastrophes occur, increasingly determined by the ferocity and irrationality of the rules of capitalism.

Just think of their commitment in Africa against Ebola or in Latin America with operation "Milagro", through which they are restoring sight to millions of blind people because of their poverty, which does not allow them simple ophthalmology operations.

An effort that must be parameterized to the number of inhabitants of the island (a little more than 11 million ),but above all to the behavior of the European Union, closed within the selfish logic of profit and the interests of its multinationals, banks and financial agencies, that while the virus claimed thousands of victims have put in the foreground the logic of financial speculation to the life of the majorities. How can we forget the closure of the many countries of Northern Europe to the solidarity commitment to the most affected countries (Italy, Spain and France) during the days of maximum spread of the virus?

In this sense, we consider as the highest expression of humanity and internationalist solidarity the altruistic contribution of the Cuban medical brigades, which for 60 years have been providing services almost all over the world with altruistic, solidarity and humanitarian work.

Cuba has once again highlighted the extraordinary humanist and supportive attitude of its Revolution, which demonstrates to the world the superiority of Socialism in responding to the fundamental problems of human beings and nature.

For all these reasons, we join without delay the campaign launched by the World Trade Union Federation to demand that the Nobel Peace Prize 2021 be awarded to the International Health Quota "Henry Reeve" of Cuba!

In this way, the prize will be awarded to a country that truly contributes and works for the good of humanity and not for the goals of small minorities who grab a large part of the wealth produced by human labor and nature through exploitation and violence.

At the same time a global response will be given to the U.S. embargo against the island, which has been strangling the Cuban people for over 60 years, to prevent them from offering such a great service to humanity, showing what can be done outside the logic of financial speculation and the ferocious and irrational exploitation of mankind and nature.