USB states their solidarity with the Greek teachers 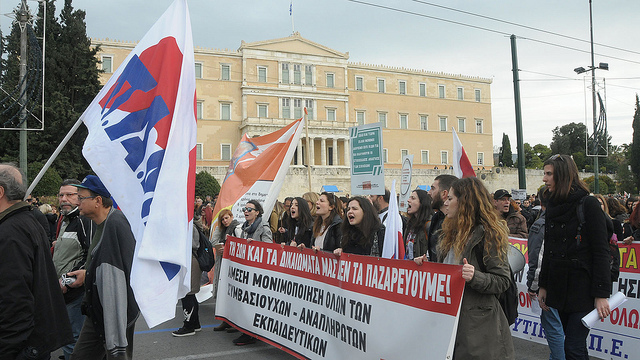 The repressive wave in Europe is getting higher and harder every day and what is happening in Athens is the umpteenth demonstration of the attempt to the freedom of demonstrating against the cuts to Public Services, and school in particular. After the announcement of the dismissal of thousand of temporarily hired teachers, the class unions and the teachers’ committees held a National Strike in Athens, with the participation of thousands of teachers from all Greece. The Government, instead of listening to the voices of the workers and find a solution to their problems – avoid being dismissed after long years of teaching being the first – blocked the protest by the use of force. The police used tear gas and flash-grenades against the crowd, wounding Theodora Drimala, Member of the National Secretariat of Teachers of PAME and Giannis Delis, MP of the Communist Party of Greece. Today, 14th January, the Greek teachers are striking and rallying again. USB School Workers express their complete solidarity with the teachers in Greece who are fighting to obtain a rightful stabilization and wishes a full recovery to the wounded comrades, while condemning thoroughly all forms of repression from a government elected to protect the interests of its citizens and now is expressing its ineptitude by using violence against the teachers who are rising and educating the new Greek generations.