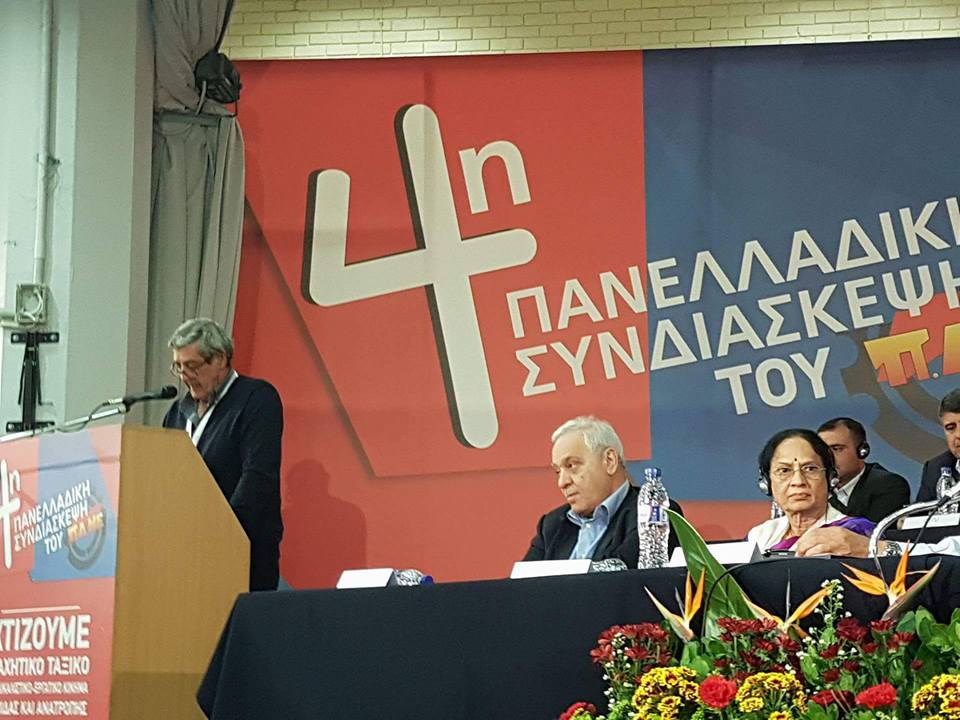 Dear comrade General Secretary
Dear delegates of PAME
International delegates
We are very honored to participate to your fouth Congress and to this International Conference. The relationship between the USB and the PAME is very close and strong, and this is very important to us. Since many years, you, as PAME, have supported and suggested important indications for addressing the class struggle in the imperialist European citadel. Your resistance and ability to act in the social conflict, and your internationalism, is a concrete example to follow, for us.
In these years, we are facing a serious of capital accumulation crisis that exploded in 2008, and that produced, especially in Southern European countries, a profound attack on workers' rights and to living conditions of our peoples. Greece, more than any other country, is suffering the aggression of the Troika to its economic and political sovereignty. In Italy we are also facing the same policies dictated by the European Union and actuated thanks to the availability and to the complicity of the so-called “center-left parties” and the yellow unions affiliated to the ETUC.
Today the European Union is restructuring its alignment with economic-financial and institutional centralization processes that are functional to the international competition, and therefore are mandatory.
In our country these policies have a deep impact on our class, but also on the institutional and legislation framework and on the pillar of our democracy, which is the Constitution born of the 1943-45 anti-fascist resistance.
The Brexit is leading to the definition of a new axis of power led by Germany and France, raising the competition between the imperialist economic blocs of UE and USA, it takes more and more obvious forms: the failure of TTIP, the conflict on the penalties to Apple in Ireland , the claims of the WTO subsidies of the state at the continental Airbus.
All across the European continent reforms were made in order to destroy the protections of workers: all these reforms are facilitating the procedures for layoff, lowering the protection and cares in case of unemployment or corporate crisis, increasing and reorganizing the forms of precariousness, privatizing the job market and demolishing even the few rules for the defense of the workers dignity, fully maximizing a condition of blackmail on the workers.
In Italy the approval of the “Jobs act”, claimed and endorsed by the European Union, has led to a new form of slavery for the workers, and in particular the introduction of vouchers as the highest form of workers merchandising. Especially in the agriculture sector, and in logistics one, mostly held by migrant workers, we can observe forms of a pure slavery, and for this reason we’ve started a specific National Campaign “NEVER BE SLAVES”.
In many European countries, and in Italy too, the awareness and the necessity of breaking the European Union is growing up, and the USB is directly engaged in this goal, by organizing strikes and demonstrations with increasing participation.
Today the grass-roots trade unions are facing hard challenges all over world. The internal debate, during the last 17th Congress of the World Federation of Trade Unions (WFTU), has strongly highlighted the necessity to organize, in every continent and in every country, the counterattack to the capital. Each organization has to sincerely reflect and assume the recommendations of the Durban Congress, and each of us has to improve the struggles in defense of the workers in the factories, in the offices, in the territories, etc. and to grown the awareness of our political function in this phase. The great effort is to identify new forms of action into the society, in order to be able to communicate with all the working sectors, but also with those sectors of the population who are now suffering the effects of the productive transformations imposed by the capital.
Our Countries are also facing the boomerang of the imperialistic aggressions that the European Union and the USA are addressing in many countries of the Middle and Near East. The war has come back also in Europe and in this war they use not only conventional weapons, but also the sophisticated tools of the informatics.
Millions of people are running away from the wars held by the imperialistic competition, which are actually fighting theirselves for the resources and for imposing the rule of capital-addicted governs.
In Italy and in Greece, in particular, the arrival of many refugees and migrants are provoquing further problems and no solution are coming up by the EU. In the meanwhile, racism and xenophobia are growing among people, together with groups and parties that use these serious crisis conditions for instigating hate against the refugees. It is our duty to takle the issue of the refugees, and we are working on it, in order to avoid that our social reference block (the workers and the popular masses) feel this ruse of the war among and between poor people.
The war is becoming a permanent condition and as a consequence, both internally and externally, an “industrial mass reserve” is growing like a huge army, directly to the service of the capital.
Huge unemployment, salary cuts, destruction of the retirement and pension system, privatization of the health care system and of the education one, increase of the work exploitation and of the time works, and many other processes are being imposed on the society. These are signs of an inner war, where the class trade unions must be a key player, in order to defend the workers’ rights, in Italy, in Europe and all over the world.
The International solidarity and the internationalism are pillars of our organizations, whose role in arising the class consciousness in our Countries is fundamental.
This conference is helping us to endorse our relationship and to better plan the future of the grass-roots trade unionism in Europe and all over the world.