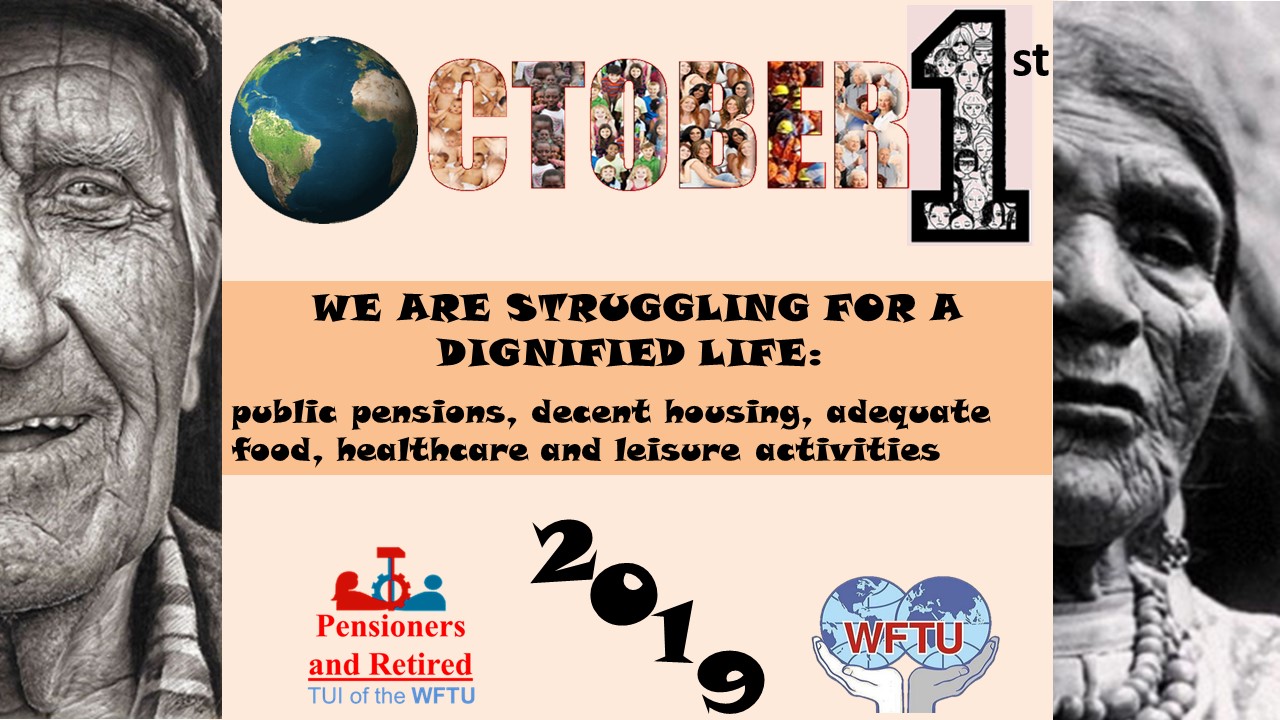 As every year, October 1, is the feast of grandparents, the institutionalization of the function of the elderly in family welfare and its transformation into a consumer event. There is not much to celebrate, the WFTU opposes this commercial anniversary:

THE INTERNATIONAL DAY OF PENSIONERS' STRUGGLE

A deadline that aims to unify the struggles of pensioners by restoring social subjectivity to a growing category and progressive policies of marginalization with the ultimate goal of destroying the right to a decent pension and old age. The EU, which is always attentive to attacking the welfare state and workers' rights, is completing the Pan-European Personal Pension Products (PEEP).

That is to say, the unification at European level of pension funds and private insurance by creating a real financial giant that makes it possible to raise large amounts of money and make them available to the financial market and businesses. This is the final step on the road to boosting private pension funds through regulatory aspects. Private pension funds are now represented as the only form of pension guarantee for the younger generations, progressively emptying public welfare through the extinction of the social security contribution given to companies. The de-contribution of work, the cutting of the tax wedge, the fragmentation of labour relations, the progressive reduction of jobs and hours worked, undermine the essence of public welfare. An operation that is all part of the strategic project of appropriating the savings of families and workers in anti-crisis function to rebuild profits.

We arrive at this deadline with a fair project elaboration on pensions (tax relief) and health (appeal in defense of public health), but with a difficulty and organizational weakness that makes it difficult to implement the campaigns that we have formally opened. The National Assembly of October 1, is not the formality to which we are called every year, but a moment of redefinition of the project Usb Pensionati and a fine-tuning of the path to be taken.

The change of government is not a victory for the left, but a change in the balance of power between members of the bourgeoisie who take over the government to implement their strategies in the sector.

Pensioners are not present in the government's inauguration speech, a not insignificant absence given their social dimension and their condition (8 million out of 16 pensioners live on a pension below 1000 euros). The cut of the tax wedge is a gift to companies, in terms of social security does not guarantee a pension to young people and puts at risk those provided. The progressive reduction of the perimeter of public welfare, until its final disappearance, is part of the plans of this government as well as those of others. CGIL CISL UIL in the new collaterality with the government, in anticipation of a future and closer consultation, announce demonstrations of pensioners, but Landini has already said that the issue of pensioners comes after that of cutting the tax wedge. Our proposal for the de-taxation of pensions remains standing in all its structural nature.

The green economy will become the new strategy for restructuring the production system, to the detriment of workers and citizens. We will only be asked to change our individual behavior in the name of lifestyles. We are being asked to join the process of de-growth brought about by the economic crisis and now we are being transformed into a choice of life. In short, living as poor people to allow a few to get rich. A beautiful strategy!

Public health is being announced as a priority area, but there does not seem to be much willingness. Yet this essential service has already contributed 37 billion cuts in the last 10 years. Differentiated regional autonomy means that the public health system will be definitively broken to the benefit of the private market.  Not only is our campaign on C-zone medicines right, it must be enriched with new content. Not a day goes by without batches of drugs polluted by substances that are harmful, particularly to generic drugs or equivalent drugs, as they are now called, being withdrawn. The choice of using generic medicines is linked to the health structures that are thus saving on pharmaceutical expenditure and to the economic situation of individuals who cannot pay the surcharge for patented medicines. If this is not class politics, how do we call it, a crime against humanity?

On a social level, to the desert of territorial services, to the robbery of bills, to the difficulty of moving, are added nursing homes transformed into real lagers given in management to unspeakable subjects.

If, as is evident, we are faced with a real strategy, it becomes essential to reunify the campaigns so far elaborated separately, in a single NATIONAL PLAN OF THE ANTIAN able to transform the right claims in a strategy of life and progress for the elderly and not only. We are called to do so and the assembly of 1 October must create the conditions for sharing, organizational and operational project to support this strategy.