USB greets and thanks the Cuban doctors and the Cuban government

On Sunday, March 22nd, 52 Cuban doctors and health personnel arrived in Italy, organized in a brigade highly specialized in the treatment of patients affected by viruses, therefore mainly virologists and immunologists.

The high professional skills of Cuban health care are well known throughout the world. Not only for studies and research in the scientific and medical field. A scientific apparatus that has developed a drug, Interferon Alpha 2B, very effective in counteracting the deadly effects of the corona virus. It is no coincidence that it has been produced and adopted in China since the first days of the infection.

These professionals are the symbol and the reality, embodied in men and women, of the internationalist solidarity of the Cuban people and the Cuban revolutionary government, who have sent a brigade across the ocean while their country also has to deal with the emergence, albeit in minimal terms, of the covid infection19.

An effort that must be measured by the number of inhabitants of the island, but above all by the behaviour of the governments that make up the European Union, until now closed within the selfish logic of profit and the interests of their multinationals, then of their populations.

The Cuban health brigades are well known to many peoples of the world for their selfless and generous efforts in every place where natural or health catastrophes occur, increasingly determined by the ferocity of the rules of capitalist neoliberalism.

Just think of their efforts in Africa against Ebola or in Latin America with Operation Milagro, with which they are restoring sight to millions of blind people because of their poverty, which does not allow them simple ophthalmological operations.

Already present in other countries against the current pandemic, such as Venezuela and Nicaragua, they are now in the world epicentre of covid19 , in the "rich" Lombardy where, due to the privatization of health care and the criminal behaviour of factory owners, who continue to send workers to work despite the pandemic, the infection is spreading more and more, causing the highest rate of infection and deaths.

In this way, Cuba highlights, once again, the extraordinary humanist and supportive attitude of its Revolution, which demonstrates to the world the superiority of Socialism in responding to the fundamental problems of human beings and nature. 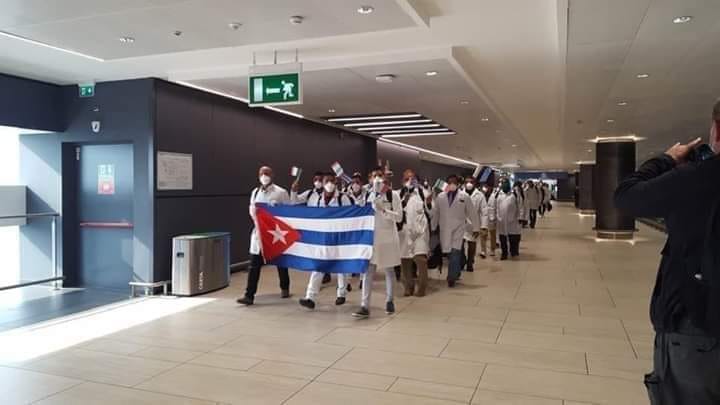