USB alongside the Venezuelan people 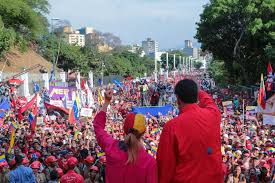 USB expresses the utmost solidarity with the Venezuelan people and its legitimate president Maduro, who are facing yet another attempt at destabilization by the imperialist forces and the local coup d'état at their service.

The imperialist forces of the world, the US and the EU, have supported their own planned coup attempt, and for a few hours the Western media have been trying to sell the fake news of a country on the brink of civil war.
The determination of the Venezuelan people needs our solidarity without a doubt and without a but.

What is at stake in Venezuela goes beyond defending the sacrosanct right of a people to determine their own destiny, and concerns the possibility of imagining an alternative model to the barbarity of capitalism and imperialism, and the misery and war it generates.

USB, along with all WFTU, is at the side of the Venezuelan people resistant.