TUI Public Services-EUROPE of the WFTU denounces the persecution of trade union,leaders of USB Italy 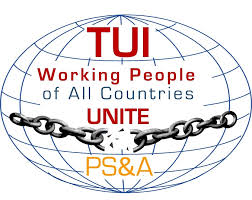 Terrorism Will not Pass.

TUI Public Services-EUROPE of the WFTU denounces the persecution of trade union leaders of USB Italy, for their protests following the murder of a worker by employers in 2016.

On September 14, 2016 Abd El Salam, who was migrant worker and a member of USB, was assassinated during a strike. USB immediately proceeded to mobilizations, while trade unions from all over the world expressed their support to the Italian workers' struggle.

Today, the Italian Government is persecuting the workers who struggle, as a representative of the employers. It persecutes the colleagues of the murdered worker, aiming at maintaining the climate of repression and terrorism that business groups want to impose in workplaces.

We clarify that such activities do not terrify the class-oriented trade union movement, its leaders and the workers.

We continue the struggle. Terrorism Will not Pass.

TUI Public Services-EUROPE of the WFTU, denounces such activities and expresses its support and solidarity with USB and its leaders.