THE PROTEST OF THE 33 FIRED PORTERS ARRIVES ON THE ROOF OF GLS. 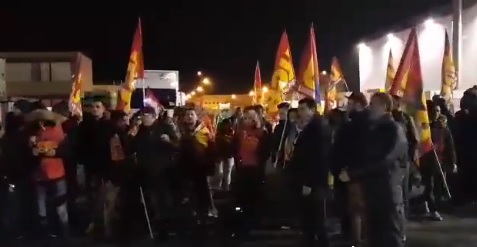 Second night on the roof of GLS, in Piacenza, for 33 porters dismissed for disciplinary reasons by Seam, the company that manages the warehouse of the multinational GLS.

The 33 porters, with USB, fight for their rights and a fair wage.
For this reason they received many disciplinary disputes up to the letters of dismissal delivered on 29 January last.
USB and the workers are waiting for answers that have been promised and never arrived.
Last 22nd of February USB made a strike and demonstration of logistics sector under the Ministry of Labour, getting a meeting to explain the hard situation of logistic workers. During the meeting at the Ministry of Labour we were assured that a national table on logistics would be convened and that attention would be paid to a system of caporalate and undeclared work that has transformed the entire sector in the land of the absence of rights. Nothing has happened to date
The 33 dismissed workers will continue their protest until their reasons are heard and violated rights are restored violated.

WE INVITE EVERYONE TO SUPPORT THE STRUGGLE OF THE 33 DISMISSED WORKERS WHO ARE NOW ON THE ROOF OF THE GLS.