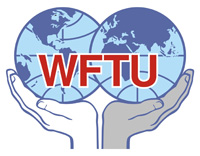 The World Federation of Trade Unions expresses its solidarity to its affiliate, USB-Italy, for the organization of the General Strike on October 21st. The WFTU representing more than 92 million workers in every corner of the world stands on the side of Italian workers and calls them to participate massively in the strike and the demonstrations in Italy.

The attack of the Italian Government to the workers' rights, salary and pensions, is similar in every country of Europe and the World. It aims in the fortification of the capitalists' profits through wage cuts and cuts in social security.

We call the working class of Italy to take part in the strike and the demonstrations massively, to strengthen their unions and keep the struggle until their demands are totally fulfilled. We strongly believe that the only solution to this situation is the class struggle for the emancipation of the working class.

The WFTU expresses its internationalist support and solidarity to the struggle of its Italian comrades and calls all trade union organizations of WFTU to stand in solidarity with the General Strike of the Italian workers and USB.