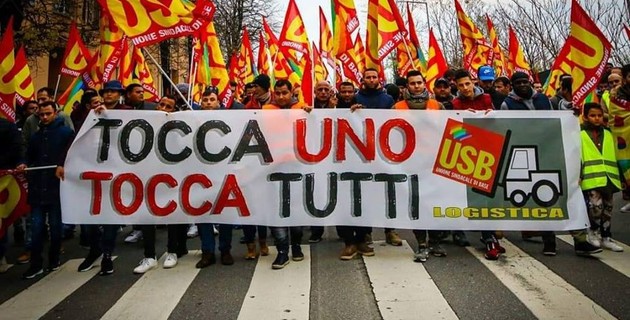 GLS fires 33 USB porters  and suspends 6 of them: they attack the union to stop the fights.

Yesterday, 29 January, 33 dismissal letters and 6 suspension letters were delivered to the workers of the GLS Piacenza hub.

This new measure is a collective disciplinary dismissal.

The context in which these acts take place is that in which 3militants of USB  are attacked with knuckles and a pepper gun.

The "fault" of the USB members is to have mobilized against the climate of violence and to have strked to claim security and serenity in the workplace.

The response from their employer was to send about 200 letters of disciplinary complaint in about 15 days (an average of 5/6 for each worker) and finally without even respecting the procedural process, with the aim of forcing him, came the dismissal.

Previously, Twelve workers from the Piacenza hub of TNT were picked up from their homes in the early morning by a  measure of housing ban as a result of the struggles of recent months against the repressive acts carried out, also for them, with hundreds of letters of disciplinary complaint.

What seems obvious to us is the concentric attempt of the masters of logistics to strike the conflicting union and the struggles of the porters who in recent years have had the merit of bringing out the illegality and exploitation that are hidden in the world of logistics and equally have brought rights and dignity to work.

It is  the facts that demostrate  that the campaign of criminalization of the porters has as its only objective to bring back the hands of history, they still want them slaves and submissive.

USB has started a process of mobilization  garrisons,  the active delegates and the national strike  logistics.

to take a group photo or individually display a sign with the words:

"Solidarity to GLS and TNT fired porters. The fight for rights must not be repressed! "

THE struggle  don't stop and are not fired, fights continue.