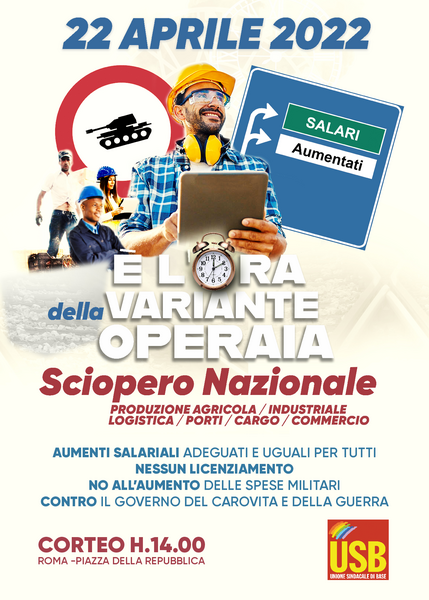 Solidarity with Workers' Strike in Italy on April 22

PAME expresses solidarity with the workers of Italy and the USB union who are going on strike in a series of sectors on April 22.

USB has called for a strike in the transport, logistics, trade and production of goods sectors and at a large rally on the same day in Rome. Italian workers are on strike demanding higher wages and protection against price hikes and inflation. They also demand the abolition of labor relations that impose conditions of modern slavery as well as the legislation of sanctions against employers for the deaths of workers and strengthening the control mechanisms for Health and Safety at work.

Under the slogan "Raise Wages, Lower Arms", the USB union denounces the participation and support of the Italian Government in the imperialist war, which is paid for by the Italian people.

PAME expresses its solidarity with the workers of Italy and their struggle for wage increases, protection of life and workers' rights, against the wars of the imperialists.

The trade union Unione Sindacale de Base (USB) has called for a strike on 22nd April in protest of the war in Ukraine and the negative effects that the militaristic strategy has on the working and living conditions of the Italian working class.

The demands are very concrete and very clear: Increase in wages and pensions to protect the working class, a decent minimum wage and denounce job insecurity, more public investment and nationalisation of strategic services to defend employment and the industrial fabric, and effective measures to protect the occupational health of workers.

The militarist strategy in Europe has led to a worsening of the working and living conditions of the working class, and that is why class oriented trade unionism must defend peace, coexistence and the political solution of conflicts as opposed to the policies of rearmament and war.

There are many challenges ahead of us. The events of the last few weeks show that a new paradigm and a new world is opening up, and that at the same time the changes are not only necessary, but unstoppable. Therefore, the main challenge and struggle that we, the peoples and the working class, have at the moment is whether these changes go in the direction of strengthening this capitalist, patriarchal and biocidal system, or whether we start to build a new model that puts the rights of all people and all peoples, the sustainability of the planet and of life, in the middle.

In this context of imperialist wars, we want to demand a new model of international relations based on eco-independence as a condition for existence and at the same time for a transformative horizon. The peoples and the working class have nothing to gain in this international logic, and much to lose in this logic of wars that generate destruction and precarisation of life.

For all these reasons, we hope that the general strike on April 22nd will be a massive demonstration of the Italian working class to generate the conditions for a radical political and social change in Italy. The success of this general strike will be a success for European class unionism, and that is why LAB sends all its support and solidarity to the USB union in Italy.

PEO Cyprus expresses on behalf of Cypriot workers its class solidarity with the strike organized by USB in Italy on the 22nd of April.

While the wealth produced is enormous and technology has advanced, social inequalities are becoming even more pronounced and billions of our fellow human beings are struggling to survive, faced with unemployment, insecurity and poverty. At the same time the high prices are further exacerbating the lives of workers.

The outbreak of war in Ukraine is causing huge consequences for the people and workers who are already paying the high price of the economic crisis and the pandemic.

The escalation of armaments and the increase in military spending are not the solution but, on the contrary, endanger world peace.

In these circumstances, capital is intensifying its attacks on workers' rights.

The struggle and mobilization of workers is the only way to defend our class interests against neoliberal policies that intensify exploitation.

The struggle of the Italian workers for better living conditions is also our struggle.

Solidarity with the Strike on 22nd of April

the Left Bloc in the Austrian Trade Union Federation expresses the solidarity with USB and the workers who will go on strike on 22nd of April.
Your fight for higher wages and protection agsinst price hikes and inflation is very important. Also for better health and safety at work.