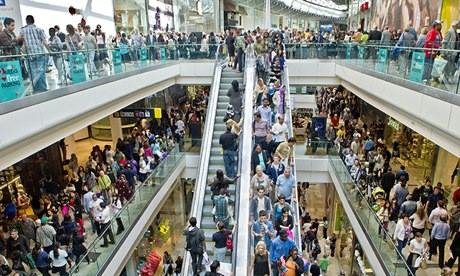 In very few years the shopping malls have changed social customs, working conditions and the structure of our cities.

They actually replaced the squares, helping in disrupting human relations and social protection. In ancient Greece the square - Agorà - was a symbol of democracy, where were held the assembly of the polis to discuss and take decisions.  Nowadays the malls are replacing these places – the squares - with a temple of consumerism without any human exchange that is not mediated by money, where the social actors come together without interacting, where the other person is seen as the one who take your parking lot or your place in the checkout line, where the hidden rules transform these eco-monsters in strange " republics " with video surveillance and private armed guards at every corner and where every citizen can feel deceptively rich but is actually a unconscious prisoner .

Behind this proliferation of shopping it's often hidden the speculative activities of large financial groups and, regarding our country, the alleged infiltration of the mafia . In Italy the Court of Auditors (Corte dei Conti), published a report on organized crime that did not have the necessary importance in the newspapers and on television. This report notes that shopping malls are the new frontiers of the Mafia. In fact, the economic activities involved in organized crime investments are “construction , real estate , commercial , and retail distribution".

The trade sector, particularly rely to the franchise that involves the major brands, allows criminal organizations to move forward to open shops on behalf of third parties not immediately connected with the representatives of the crime. In this way, Mafia or Camorra or 'Ndragheta are able to control the entire process, from the construction of the shopping mall to their exploitation, allowing to use  “the dirty money” coming from their illegal activities.

Not less important is the problem regarding the income: the purchasing offices of large retail chains (GDO) should serve for "rationalization and planning of supply “ but in reality they are used as a trust to control prices and download its effects on wages and working conditions, from the production to the distribution, and on consumer prices.

The Italian Competition Authority has decided to investigate about the dynamics of prices and its relationship with the contractual conditions applied by the purchasing offices to the companies that provide the agro food products. This conditions create inequality and aberrations with a secure tangible economic benefit only for multinationals while farmers have seen declining theirs to the point that is no more profitable for them to collect fruits and vegetables, since the labor cost is  higher of the price paid by the purchasing offices, or leads to forms of illegal hiring like the cases of Rosario in Calabria or Nardò in Puglia Nardo, where thousands of migrants are enslaved in the citrus groves. But at the final end of this chain dominated by the GDO, the selling prices to the consumer is led to the stars, with repercussions on citizens who pay another unacceptable cost to the  exploitation and to the profit.

Another significant problem is due to the complete deregulation of working conditions applied to more than two million workers in the sector, that did not lead to any economic growth but only to the worsening of the crisis, adding another piece to the puzzle of insecurity, low wages, difficulties in social life. The rise of large commercial areas, all of which are open around the clock and throughout the year, is not sustainable for small and medium-sized enterprises, which are closing in a huge number.

The rise of the cost of facilities management will be discharged on workers and consumers in favor of profits of large multinational trade and the League of cooperatives, which are aiming to make further profit and less job places with more automation, like self weight machine or the automatic cashier.

USB invites you to discuss the real issues that impact heavily on the lives of these workers : low wages, job insecurity, part-time, discretion and freedom restriction.

Since few months, finally was recognized that in Italy there is a problem of low wages. The form of contract used in the trade sector is that mostly part-time, but everybody knows that is almost never a free choice of the worker, it is the only option offered to him. The possibility of improving this condition is remote and often does not pass through seniority, the result is a medium wage  around 600-700 Euros per month.

Precariousness is so widespread to became a "cancer" in this sector that favors the possibility of multinational trade to be able to "blackmail " their empolyees.
Those who knows real labor conditions in supermarket or hypermarket are aware tl that it is difficult to even be able to go to the bathroom and it is often necessary to ask permission, since is considered an integral part of the organization of labor and employers' power .

Every effort to claim and even discuss about labor rights is difficult because the repression of dissent especially if represented by conflict union; that's why we value tha working in a third millennium mall is similar to what happen in the factories in XIX° century, with the same violent nature supported from mature technologies.

This is the climate that you live in the shopping malls: work organization reflects the one held in institutions like prisons, mental hospitals or barracks, passing trough formal organization and centrally administration operated from the control subjects – members – like a barracks. The many stories we hear everyday as union delegates, and the many others that unfortunately nobody listen, are stories of ordinary harassment lived in solitude and pain.
In an industry where over two million workers almost 80% are women, we can speak about a real gender apartheid. The women of the trade secor, as the women of all other sectors, are asked to work more to earn less and often are discriminated about career in the companies.

The equal opportunity is based on the elimination of all forms of discrimination in respect of the Rights of the individual. In particular, it means to ensure that women could make choices and take actions, both in private and professional life, without any kind of gender inequality, taking the chanche to get the creativity, skills and motivation that women can assure to society.

Instead, many women of commerce lose their jobs due to pregnancy, even beacuse most of them are forced to sign letter of resignation beforehand, the most popular way to bypass law protecting working mother. Many women complain about the harrassment and oppressive attitudes by superiors, often male.

Last issue, but not least, regards the possibility of the shops and hypermarkets to keep open 7 days a week and on all holidays, creating an apparent advantage and comfort to the consumer but at the same time a very serious problem for the workers, who see reducted the spare time for themselves and for their families. Liberalization of working hours during holidays, granted by one of the last Goverment decree, issued by prime minister Monti in 2012, well known as the "Save Italy ", added another piece to the puzzle of insecurity, low wages, difficulties in social life.

In a country which politics recall constantly the fondamental role of the family, denying free time to a industry where 80% are women and when public services are not active often even on Saturdays is a strong contradiction.

Rising of wages, reduction of precauriosness, possibility to switch from part-time to full-time, stopping the discretion of the directions and negotiation time and shifts and, not least, freedom of speech and criticism, these are the issues we are fighting for.  Issues unlikely to be faced without a conflict and indipendent trade union.

"Freedom is only one: the chains imposed on one of us weigh on the shoulders of all. " - Nelson Mandela