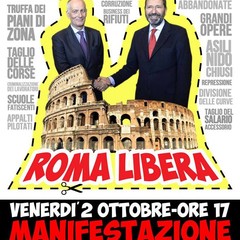 On October 2, the USB has called a local strike, in Rome, with a demonstration that will start  in the afternoon, from the Coliseum.

The struggle day is called  to defend the public goods and services against the projects of privatization and exploitation followed by the Major of Rome Ignazio Marino.

Marino according with the government Renzi is following the lines of EU that impose the sale of the public services to the private big companies.

The Prefecture and Police have punctually forbidden the demonstration. It’s the second ban of demonstrations in only 2 weeks, to which are added the bans of strike of the local transport called by USB.

There's is a heavy air in the City as in the rest of the country; many workers are expecting the third and umpteenth ban of strike. This climate is well represented by lynching of the Coliseum's workers for an authorized a trade union meeting, scheduled by time.

The attacks moved by Renzi against the right of strike and the trade union,  underlines like the drastic reduction of democracy is one of the legs of these economic reforms and privatizations.

To justify the sale of the public services to the private companies the Junta of Rome and the Government have launched a campaign against the workers, defined as slackers, and against the idea of the public property of the sector like transport, water, energy, waste, kindergarten and other services or needs, branding it as inefficient and expensive.

It isn’t an Italian question,  Started from Bruxelles with the support of the capitalistic groups a violent campaign against the workers and the class oriented trade unions, now is marching in each European country. Through newspapers, televisions lawyers, pseudo-intellectuals together with businessmen, politicians and the accomplices Trade Unions of ITUC are supporting the construction of the EU's Cage, on the worker exploitation.

We can't accept the ban of struggle! We will lead in the streets along to the workers of the services: the suburbs affected by the cuts, and the weaker sectors of the city from the homeless to the unemployed, migrants to young precarious.

The demonstration of October 2 is our better way to remember the 70 anniversary of the WFTU classist and internationalist, together with our comrades, brothers and sisters that are struggling in the world.