President Mattarella don't speak in the name of the Italians, the Israeli occupation is injust and unacceptable! We support the boycott weapon for a right peace in Palestine 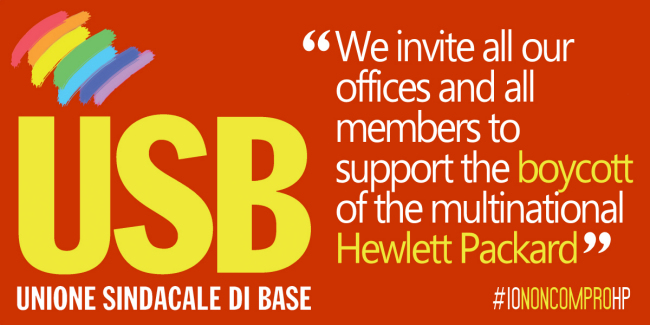 In a recent visit in Israel the President of the Italian Republic Mattarella expressed his support to Israel's policy and he sentenced BDS campaign (Boycott Divestment and Sanctions) as inadmissible. As democratic trade union strength, truly anti-fascist and anti-racist, we consider this recent statements of Mattarella very heavy and unfounded.
On 29 May of this year USB joined the international BDS campaign against Israel responding to the call made by many Palestinian organizations.
The BDS campaign is one of the weapons that peacefully opposes to the ongoing "boycott" , which for over sixty years, Israel daily leads against the Palestinian population.
The current Israeli system controls the Palestinian economy, it administrates the access to energy and water resources, as well as to the imports/exports where Tel Aviv manages the customs taxes. Israel is responsible of the dispossession of the Palestinian land and resources, a dramatic situation compounded by the settlers who occupied 42% of the West Bank.
According to the Palestinians social and trade union organizations and by the Palestinian Central Bureau of Statistics (PCBS), due to the high level of unemployment,  more than a third of Palestinian workers is forced to seek a badly paid work in the colonies through a system complicated and humiliating done of inspections and permit.
The Israeli system smites, also, the Palestinian health sector by limiting the movement of doctors, patients and medications. Two data summarize the results of this dirty war: the first concerns the life expectancy of the Palestinians to 10 years less than that of the Israelis and 18.8% of infant mortality that is five times higher than that one recorded in Israel.
The statements of the President Mattarella contradict the general sentiment that exists in Italy that is of condemnation of Israeli policies and of sympathy for the Palestinian people.
On the contrary, the definition of Israel as a democracy and condemnation of the BDS campaign, are functional to the economic and commercial interests that bind Italy and NATO to Israeli state.
The mission of the President Mattarella and the heavy and dangerous recognition of the Israeli pretensions on Jerusalem,  come few days after the UNESCO resolution that attempts to preserve East Jerusalem as a Palestinian cultural heritage.
The Israeli security policy is based on the systematic violation of the international law, the breach of UN resolutions and the ruthless use of weapons,  as the Gaza bombings of 2009 and 2014 , with more than 4,500 dead remember us.
Despite all this, Italian companies how Aermacchi and Leonardo (ex Finmeccanica) continue to sell weapons and technologies to the Israeli army.

The USB, along with the wide international movement of solidarity, will continue to support the Palestinian people, even with the BDS campaign, to reach a right peace for Palestine, the only solution that can guarantee a peaceful future for all peoples of the near East.