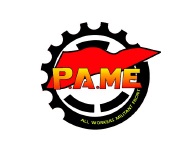 Against the banning and the intimidations of the Italian Government-Local Authorities the workers and trade unionists of USB will go on the realization of their demonstration.
The class trade union movement of Greece, PAME will be on their side