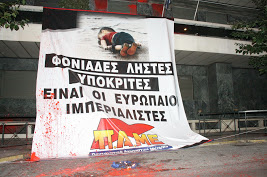 PAME held a massive demonstration on Wednesday, September 23rd, in Solidarity with the Migrants and the Refugees, protesting against the Anti-migrant policy of the European Union. The EU and the Government of the Member States, hypercritically express sympathy to the refugees, when they are those who cause the uprooting of the hundreds of thousands of people, with their imperialist interventions. PAME in the early afternoon gave one (1) tone of milk to refugees who are camped in Athens and later, thousands of workers, youth and people from the popular strata demonstrated the streets of Athens. When the demonstration reached the EU Offices the demonstrators started shouting “Murderers-Murderers”, put a huge banner at the front side of the building with the photo of young Syrian boy, who was drowned trying to cross the see with his family. The banner wrote “Murderers-Thieves-Hypocrites Are Europe’s Imperialists” At the same time many demonstrators through red paint and burned the flag of the EU.