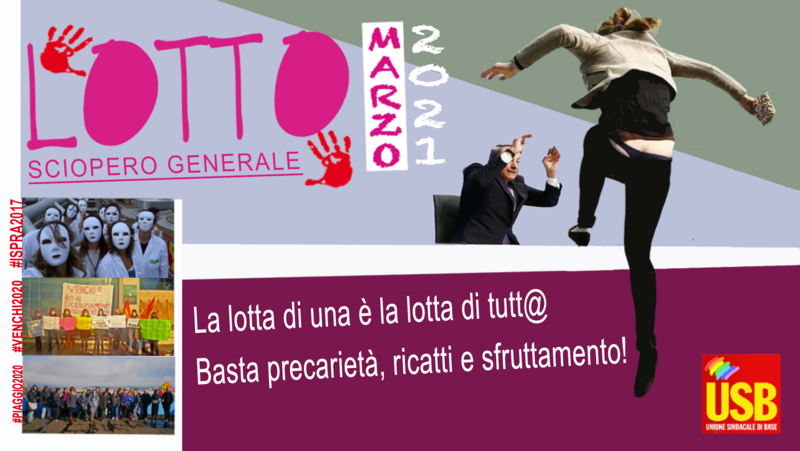 For the fifth consecutive year USB responds to the call launched by “Non una di meno” calls  a general strike of all public and private categories for the entire day of March 8th, 2021.

2020 was the year of the pandemic, but also the year in which the Guarantee Commission (a Commission for the application of a grave law on strikes)  banned strikes and imposed heavy fines on those who, like USB, dared to strike. It was the year in which the veil was torn on the role of social reproduction and the burden of care work placed on women, on violence as a systemic phenomenon, on economic exploitation, on precariousness.

Centuries have passed, but even the pandemic of the 2000s has given us a country that relies on family-based welfare where the real social shock absorber continues to be women. Without this invisible, free work, taken for granted, the containment measures would not even have been imaginable. The jobs that guarantee social reproduction are indispensable, but they continue to be unrecognized while their exploitation is increasingly intensified, inside and outside the home.

The home as a continuous cycle of production and smart working as a multiplier of workloads, for the benefit of the employer.

The home as a violent prison: during the pandemic, complaints from anti-violence centers have increased by 74% compared to last year and feminicides are growing, while homicides are decreasing.

Isolation, forced cohabitation, and the inability to materially escape violence by leaving the home have made women and their children even more vulnerable to domestic violence. According to the VII Eures Report during the months of the first lockdown, 80.8% of victims lived with their murderer.

That's the reason why the 8th of March will still be a general strike.

It will be a strike against exploitation: intermittent work, precarious, demoted, blackmailed, free, invisible.

It will be a strike against care and reproductive work, without which the whole society would be forced to stop.

It will be a strike against the dismantling of the welfare state and for the right to income, housing, work, equal pay, and support measures to escape violence.

It will be a strike to leave no one behind: the end of the blockade of layoffs and evictions is around the corner. To those who talk about good debt and bad debt we answer with the fight against inequality and redistribution of wealth.

It will be a strike because a strike is the most powerful weapon we have!