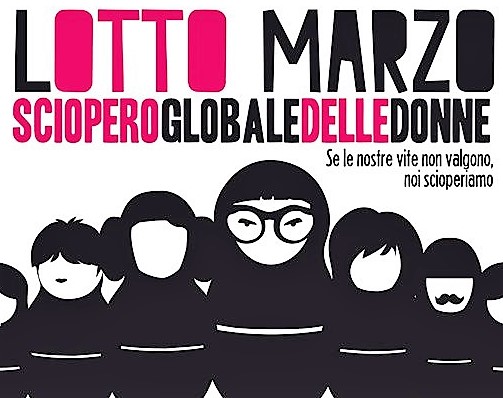 Also this year USB Italy responded to the appeal of  “Non Una Di Meno” with the proclamation of the 24-hour general strike on March 8, because the fight against all gender discrimination and every form of male violence on women is a substantial part of the overall struggle of our Syndicate.

There will be more than 70 countries in which women will cross their arms, abstaining from any productive and reproductive activity, formal or informal, paid or free. The strike will involve permanent workers, VAT, precarious, black workers, care and domestic work, interns and workers without a contract, the unemployed and female students.

In all the cities of Italy there will be actions, stakes, thematic squares, principals.

A strike against male violence against women, against the lack of funding and recognition of the Anti-Violence Centers, against the closure of women's spaces, against conscientious objection in public health services; for the right to universal welfare, to self-determination income, to housing, to work, to equal pay, to school education, to measures to support the escape from violence.

A strike that intends to reject to the sender any attempt to exploit women through laws and campaigns of racist, fascist and sexist hatred or justify further restrictions on the freedom of movement of migrants and immigrants.

A global strike to affirm that if gender-based violence is a structural and systemic phenomenon that crosses all areas of women's existence, then we need to field responses capable of thinking of a radical transformation of society and relationships, as well as of conditions of life and work.