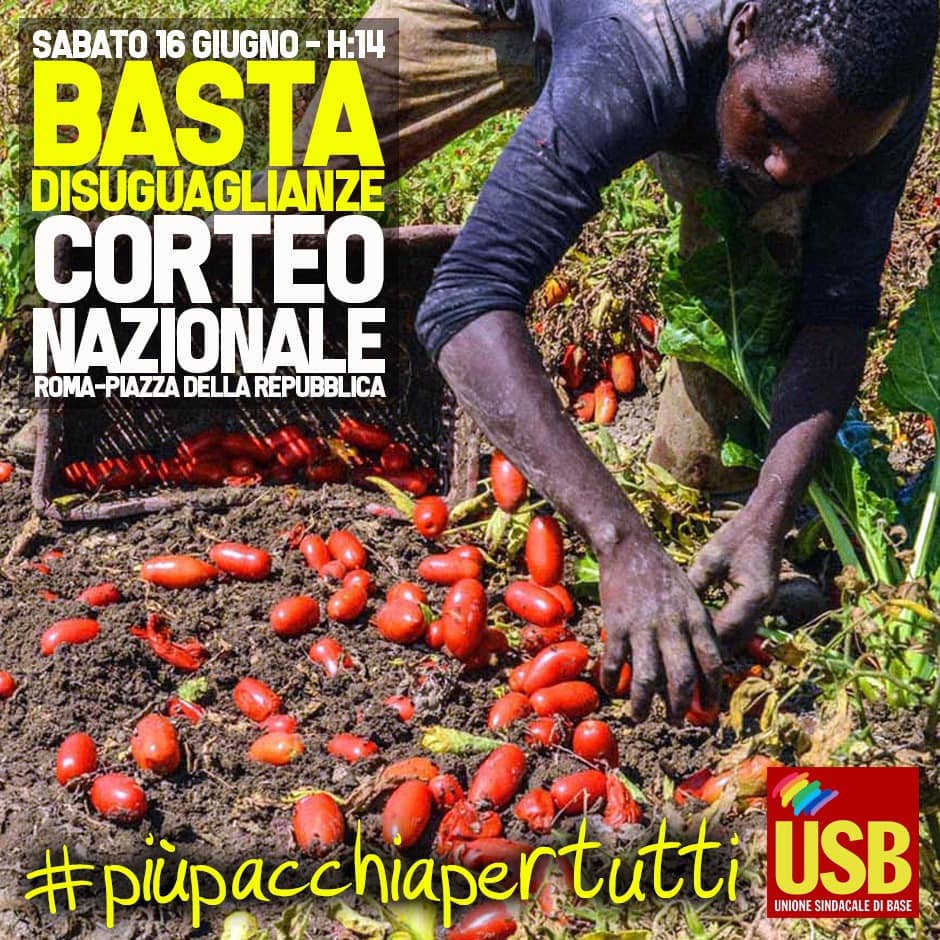 USB has long launched a national demonstration on some issues that are at the heart of the condition of the social and geographical peripheries of our country: first of all the house, with the enlargement of the exiguous heritage of social housing, the income to fight precariousness, low wages and the blackmail of the workplace and the creation of public jobs to counteract hydrogeological instability and safeguard the territory, other urgent matters are the response to the requests of the populations hit by natural disasters (earthquakes, floods, etc.), the increase in minimum pensions and the abolition of Fornero (pension law), the abolition of the laws more hateful in recent years, from the Jobs Act to the Good School, the fight against any gender discrimination.
The murder of USB delegate Soumayla Sacko and the wounding of two other comrades, the protest of these days have putted under light the terrible situation of a part of workers, laborers. They are men, workers, migrants in slavery.
USB is bringing fight with them and with all the exploited: workers, pensioners, unemployed, and all the part of society represent today our class.
We have to give a signal to this new government, some of these themes appear in the Government Contract, while others like the housing drama are completely absent. Just as there is no general question of restoring a climate of protection of the rights of those who work in recent years have gone heavily behind. But the key factor to understand if the new government will respond to the expectations raised and begin to reduce the chasm of social inequalities that has arisen in recent years is how much it will be willing to disobey the EU's constraints. Already the rewriting of the program and the reformulation of the team of ministers have been signs of realignment and the growing attention of European bureaucracies suggests that the vice will tend to tighten up further.
We are convinced that in order to reduce social inequalities it is necessary to promote social and labor policy choices that go in a completely opposite direction to that adopted in recent years. For this we consider the announced opposition of the Democratic Party and the confederal unions a shameful defense of the choices of the past and of the diktat of the EU. There is a need for a real change, a radical inversion of course that puts the interests of those who work, those who are exploited, those who in recent years have been taken away from rights, wages and social services, and has always seen the focus more riches in the hands of less and less people.
The event on 16 June will therefore be a great demonstration in support of a social platform to combat social inequalities and against the EU's claim to influence our future. It will be a cry of truth and justice for Soumayla Sacko and for all migrant and Italian workers who are exploited
USB