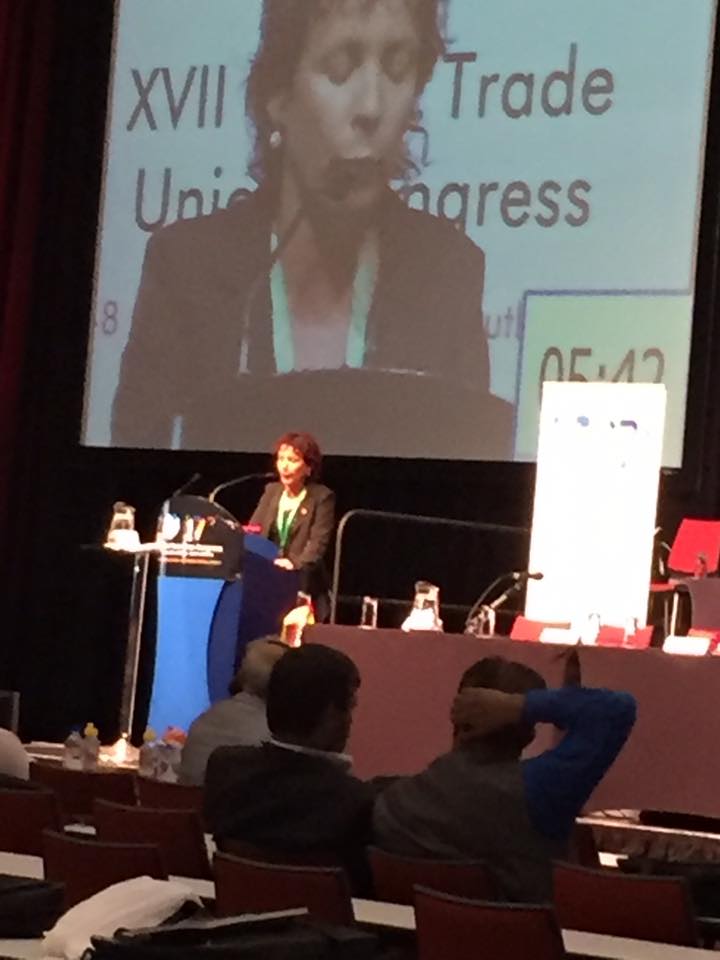 Dear Presidency of the 17th Congress of the World Federation of Trade Unions (WFTU),

On behalf of USB ITALY I wish to greet all the delegates and all the organizations affiliated to the WFTU and gathered here today with a view to relaunching and making our great international organization grow even more.

The current phase and situation in which - as class-oriented unions – we find ourselves struggling to build the mass and internationalist union is extremely complex and difficult.

The systemic crisis of Capital does not seem to have a solution; the European Union is restructuring itself with economic, financial and institutional centralization processes, which are functional to  international competition - and hence mandatory.

In Italy these policies are having a very heavy impact on our class of reference and on the  institutional and regulatory framework, as well as on the Constitution born of the so-called Resistenza, namely the 1943-45 anti-fascist movement.

Brexit is leading to the definition of a new power axis led by Germany and France, by reviving the competition between the EU and US imperialistic economic blocs, which is taking ever more evident forms: the TTIP failure, the conflict on the penalties against Apple in Ireland  and WTO  claims for compensation on the State subsidies to the European Airbus.

As the class struggle within European borders, the war waged on several fronts is taking up  more acute forms.

The migrants fleeing war zones to reach Europe, the closure of borders in some countries and the agreement reached with Turkey to block the migrant flows, as well as the instrumental use of the desperate people who survive the Mediterranean crossings to swell the ranks of the reserve industrial army and divide the working class from inside, are a tragedy and one of the greatest contradictions of this era.

The European Union governs the various nation-States through the so-called memoranda and the recommendations, which go in the direction of cutting the welfare State and pensions, raising the retirement age and destroying labour rights.

In Italy the adoption of the Jobs Act, requested and hailed by the European Union,  has led to new forms of slavery in the labour market. The strategy and priorities of European policies (defined in the Lisbon agenda) are all designed to support the aggressive capacity of the European economic area: the creation of a "favourable environment for entrepreneurs"; the adaptation of the labour market and the welfare State (flexibility, adaptability and employability, social security reform) to the entrepreneurs’ needs: the increase in spaces and market areas (liberalizations and privatizations), the organization and specialization of the economies (with an international division of the industrial and service sectors  at European level).
The strategy for reforming the labour market, reaffirmed in the various agendas and recommendations, regards not only work but also the whole social system. With the excuse of fighting against unemployment, in addition to increasing workers’ precariousness and flexibility and cutting wages, the whole social system, ranging from education to pensions, becomes a market variable and a variable of the related competitiveness of enterprises.

With the so-called "Agenda 2020" the European Union sets the goal of modernizing the labour market, by indicating the need to adapt the relationship between companies and workers to the changed conditions resulting from the economic crisis, depending on the increase in labour productivity.
Across Europe the governments have implemented reforms which have devastated the forms of protection granted to workers: in Germany with the Hartz Plan; in Spain with the labour reform of Prime Minister Rajoy in 2012; in France with the Loi Travail;  in Italy with the Monti-Fornero Law and Renzi’s Jobs Act; in Greece with Papandreou government’s reforms of 2010 and the  Memoranda currently managed by the government led by Syriza.  All these reforms make it easier to dismiss workers, reduce the protection in case of unemployment or corporate crisis, increase and reorganize the forms of precariousness, by further privatizing the labour market and scrapping the rules safeguarding dignity (as is the case with the Italian remote controls of workers and the deskillings), as well as maximizing a condition of blackmail towards workers.

The class condition in Italy is characterized by great fragmentation, which tends to result in a fight between the poor, artfully fomented by obsessive media and government campaigns.
Precarious workers against workers with open-ended contracts, young people against pensioners, Italians against migrants. A situation of fragmentation and internal struggle resulting from  extremely difficult economic conditions combined with a strong ideological campaign, which is wiping away from our society not only solidarity, but also the ability to recognize the real class enemies.

In this situation, particularly in Italy rather than in other European countries, the level of conflict and the ability to react are limited mainly because of the complicity and connivance with the employers’ and government policies of the unions affiliated to the ITUC.

Despite difficult conditions, which are deeply rooted in the history of Italy, in which a previously leftist ruling class has shifted completely to the class opponent, USB is building a conflict-oriented union, in connection with the other union organizations adhering to the WFTU in Europe.

We are building and supporting struggles in all areas of public and private work, with a view to linking the struggles of those who today - although belonging to the same class - have been divided by a systematic work carried out by the Capital.
We endeavour to join migrants, workers, pensioners, the unemployed, the homeless and the  labourers to defend their rights.

On September 14 last,  Abd Elsalam Eldanf Ahmed, an Egyptian immigrant worker and our  delegate to the logistics multinational companies GLS,  was brutally killed in Piacenza. Abd stood in front of his company picketing to defend not his job, but his colleagues’, thus giving an example of class solidarity which is rooted in the best history of conflict-based unionism.

A murder which shows the brutality of an employer class that now has at its disposal all the European anti-worker policies mentioned above.

The news of Abd Elsalam’s assassination was delivered with great prominence by the Italian media  and we received many solidarity messages from unions around the world. Now in Italy there is greater awareness of the advanced role that migrants can play in the class struggle.

These vanguards must be given union, organizational and political instruments to defeat capitalism once and for all and build socialism in Italy, in Europe and all over the world.

We have called a general strike in Italy on October 21 next on our struggle platform. On October 22  there will be a large demonstration in Rome that we have organized together with many  political and social realities. The goal is to overthrow Renzi’s government and fight against EU policies.

USB was created to give these instruments to the working class living in Italy. Having found a formidable multiplier of strength in the WFTU, we will continue to provide our contribution to the growth and strengthening of the WFTU in Europe.

Dear comrades, we shall face a period of great conflicts and changes, in which the organization and the unity of workers will play a fundamental role to change the international balance of power in favour of our class and the progress of mankind.

A daunting task we can face with greater strength because we are united. This is the reason why we will be invincible.