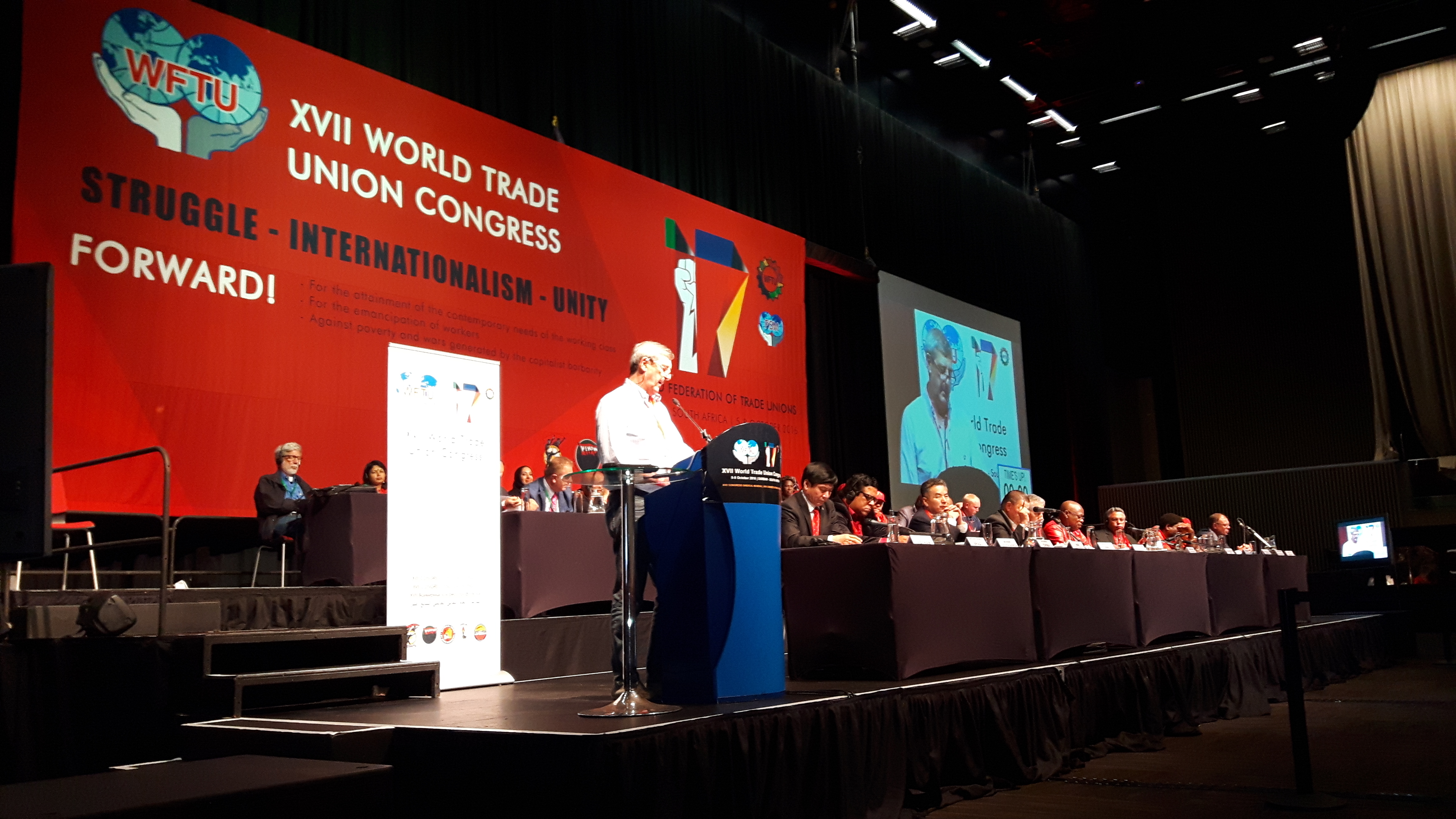 On behalf of the million workers belonging to the TUI Public Service and Allied (TUI PS&A), I warmly greet the delegates and all the member organizations adhering to the WFTU which are gathered here today to relaunch our great  international organization and make it grow even more.

The WFTU growth recorded over the last five years has affected all continents and all sectors, thus showing that international solidarity, the support to struggles, the ability to oppose the criminal projects of Capital and the need for a class-oriented union movement without links with Capital are strongly supported by the WFTU.

The characteristics of the capitalistic policies which dominate most countries all over the world are the following: the centralization and concentration of capital and wealth; the financialization of the economy; the systematic attack on the social functions of the State achieved with workers’ and peoples’ struggles; the mercantilization of all spheres of social life, in a logic of privatizing anything that can generate greater income to capital; the attacks on international law and on the sovereignty of States; the centralization of political power and its submission to the economic power and to the militarization strategies of international relations.

Throughout the world the whole WFTU is committed to fighting against capitalistic policies, with a view to eradicating the exploitation of man over man.

As the other TUIs, the TUI Public Service and Allied (TUI PS&A), which held its 12th Congress in Kathmandu, Nepal, in February 2015, is committed to promoting the growth, expansion and development of the whole WFTU.

All over the world public workers are currently under the fierce attack of Capital and employers.

The systemic crisis of Capital, which began in 2008 in the United States, has affected the whole world and its devastating effects show no sign of abating. It has encouraged the attack on public services and working conditions in offices and companies, with the main aim of wiping out the achievements of the international labour movement, especially in terms of education, health protection and pensions.
After the huge progress the labour movement had recorded at international level, by using the welfare state which had been created in response to the advent of socialism, now the Capital is trying to recover what it had been forced to cede after World War II.
In all countries the growth of the State social functions led to a significant reduction in inequalities which, on the contrary, today runs the risk of suffering a large setback.
The main strategy put in place by the bourgeoisie and the capitalistic governments is the privatization of strategic economic sectors by transferring to private entities and individuals the assets and services so far guaranteed by the State monopoly, with a view to ensuring to multinational companies and to private monopolies huge accumulations of wealth, while the peoples have experienced rising prices, as well as the reduction and worsening of the spreading and quality of services.

For years the capitalistic governments have been operating systematically for public services to deteriorate and becoming of poor quality. Schools and hospitals have been closed down and other community-based services have no longer been ensured. Cuts in social security benefits and pensions were made so as to maintain that the State system was no longer able to ensure efficiency and quality of services and hence it was inevitable to entrust these functions to private entities and individuals.
Obviously for this operation to succeed the public services had to be made inefficient by attacking the public employees’ rights, starting from the right to strike and to be organized in unions, and by imposing - with the connivance of the trade unions affiliated to the ITUC - the reduction of staff without ensuring the required turnover, the cutting of wages, the freezing of careers, the blocking of collective bargaining, the increase in working hours and the proliferation of precarious work.

With the Congress held in Kathmandu the TUI PS&A has resumed - more vigorously - its activities to counter privatizations and the aggression of Capital against public services and public employees.

In particular, the TUI PS&A is fighting:

to ensure modern, efficient, high-quality, universal and free public services, so as to meet workers’ and people’s real needs, as well as to avoid their outsourcing or privatization and to refuse their use for the oligarchy’s accumulation of profits;

to repeal all the rules relating to the public employees’ rights in the countries in which they have been imposed;

to improve the public employees’ working and living conditions, which means higher salaries and a working time enabling them to achieve a better work/life balance;

to put an end to precarious and non-standard employment contracts and to provide guarantees of stability in public employment so as to ensure independence from the capitalistic governments, both in the central, regional and local government and in the State-owned business sectors;

to exercise the right to union freedom (such as freedom of association, meeting, demonstration, participation, etc.) in all workplaces and the right to collective bargaining;

to implement social policies meeting the people’s and workers’ interest in a fairer and more equitable distribution of wealth, by rejecting charitable social policies;

to reject all neoliberal and austerity policies which, in various parts of the world, try to destroy the work and social rights of workers and peoples;

to ensure peace and international solidarity against war, militarism, aggression, interference and blocs which undermine the workers’ and peoples’ interest, so as to defend national sovereignty and ensure peoples’ self-determination.

For the first time we have promoted and implemented an International Action Day to fight against  privatization, which took place in many countries around the world on April 4, 2016 and involved also sectors adhering to other TUIs (transport and  school sectors, etc.).

For the future we have decided to promote participation and initiatives by widening mobilization and extending it to a "week of fight against privatization" to be held every year, always at the beginning of April.

With specific reference to the structuring of Regional TUIs, so far we have succeeded in convening and organizing the TUI PS only in Europe. In the coming months we will convene other regional meetings, hoping for greater collaboration by Regional Vice-Presidents and for the resumption of relations on every continent. We had to replace the Vice-President for Latin America and that caused a delay in the growth of the organization in that region.

At economic level there are very few organizations which pay their annual fees and this makes it very difficult to organize meetings, print propaganda material, etc.  However, we have opened a website and a Facebook page and we urge all organizations to send information on their struggles and initiatives so as to draw up a regular international information newsletter as soon as possible.

Despite the difficulties we have incurred in rebuilding TUI PS&A we are determined to continue our work which we deem to be very useful for the WFTU. We ask the organizations and Confederations of all the countries in which the WFTU is present and operates to help us promote the adherence to the TUI Public Sector and strengthen the commitment to develop TUI PS&A and the whole WFTU.