INTERNATIONAL MEETING IN SOLIDARITY WITH THE PALESTINIAN PEOPLE AND WORKERS 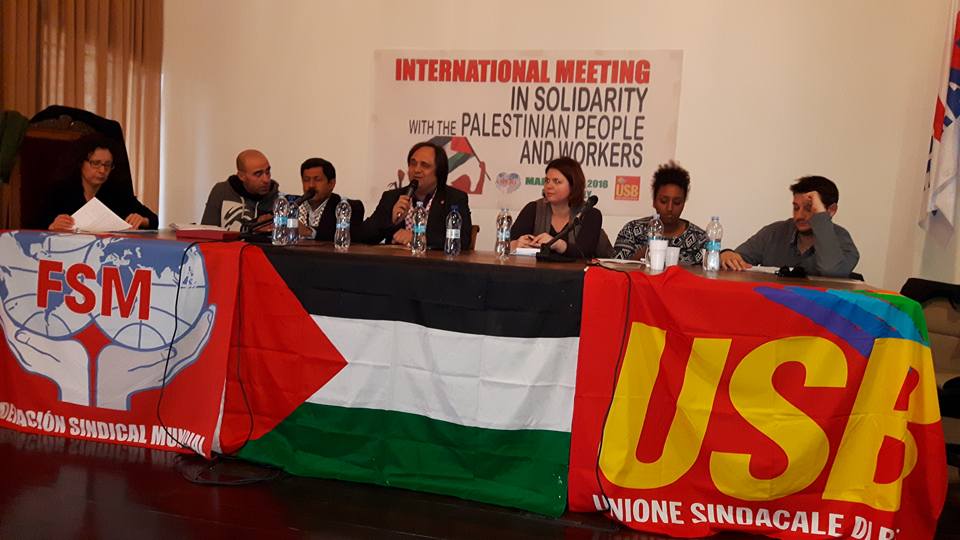 Support for the fight against the Israeli occupation and for the rights of Palestinian workers working in Israel, support for the GUPW.

These are the main themes of the International Meeting of Solidarity with Palestine by the USB and the WFTU, which took place Saturday, 12 in Milan. Confronted with Mohammed Yahya, on behalf of the General Union of Palestinian Workers, the WFTU Palestinian Union affiliated, there were Olga Koliusi of Greece, Mathieu Devch of the CGT's PAME of France, Bassam Saleh of the Committee “Whit Palestine in the heart”, Cinzia Della Porta USB International Department , Pierpaolo Leonardi on behalf of the World Federation of Trade Unions (WFTU).

The need to return to the spotlight the Palestinian question has been well addressed in opening remarks by Riccardo Germani of Lombardy USB hosted the event.

Mohammed Yahya told not only about how severe the escalation of the aggression of the Government and of Israeli troops but also how many problems they face every day the Palestinian workers, especially those forced everyday to go to work for Israelis and forced to undergo humiliating lines at check point that often result in abuse, violence, arbitrary arrests and killings. The unemployment rate is high and employment is characterized by low salaries and heavy working conditions.

The scenario is war, infernal mechanism war -exodus-exploitation, instrumental in creating an industrial reserve army at the service of a systemic crisis, capitalism and the role of the European Union, the United States imperialist pole construction, and Nato.

The focus of the discussion was how support for the BDS campaign-boycott, divestment, sanctions--strongly supported by GUPW and instead opposed by the other Palestinian Trade Union affiliated with the ITUC -International Trade Union Confederation, (the former CISL International) now thematic maps. The USB has declared itself willing to invest the body of the Organization and the categories of the countryside and to support actively the GUPW both in Palestine than in Italy.

Other guest of CGT and PAME have also intervened to strengthen the friendship and the common tie Trade Union stressing the importance of adherence to the WFTU and launching the next WFTU World Congress in October in South Africa where international solidarity will be one of the topics at the Centre of the work.