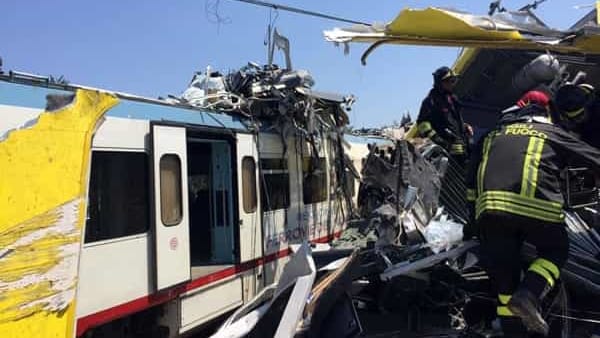 The frontal clash, among two local trains, happened on July 12 is the further  slaughter that has precise responsibility in the national and local political institution and  in the leadership of the Railroads.

The trains of the privatized  Ferrovie Nord  Barese traveled to 100KM/h, along a platform belonging to the Ferrotramviaria also privatized too.
The trains were crowded of workers and university students. The clash has happened in the open country, on a line with a single track, this railroad line is object of denounces  and parliamentary interpellations, for its dangerousness. The safety of the circulation on this line is submitted to the system of the 'telephone block', that it’s found on the exchange of phonograms among the stations.
The Company and the government have immediately spoken of "human error", a thesis good  to hide their responsibilities for the economic cuts of the investments on safety and for the delays in the construction of the second track. The 60%,  around  9000 km of the Italian lines is composed by a single track , a lot of these are local railroads.

The disaster, but it would be more correct to speak of massacre, it’s happened in the south of Italy, where the infrastructures are in worst conditions. The discrepancy among the north and the south of the country is generated by the politics decided  by the ruling  class that grow up on this disparity and that it makes its business with a criminal mind.

By several years , USB is asking that the Railroads, have to put on safety;  buying new trains for the local tracks, using  the modern technologies and sensors, constructing modern and safe tracks, reducing the schedule of job, adding the second driver and investing in the maintenance .  The Government and the Companies contrarily, “"to save" costs and profits”, they put on risk the life of passengers and railroaders.
Without any doubt  this is a crime ! The 23 deaths, included  the  railroaders, the tens of wounded,  the serious injured  that are still fighting to survive,  they and their families are all on the consciences of this ruling class . These criminals put the cuts on the safety on the  profit margin of the Railroad Companies.

Of forehead  the increase of  these criminal disasters it becomes even more necessary to stop the privatizations and to put under the public control the entire railroads.