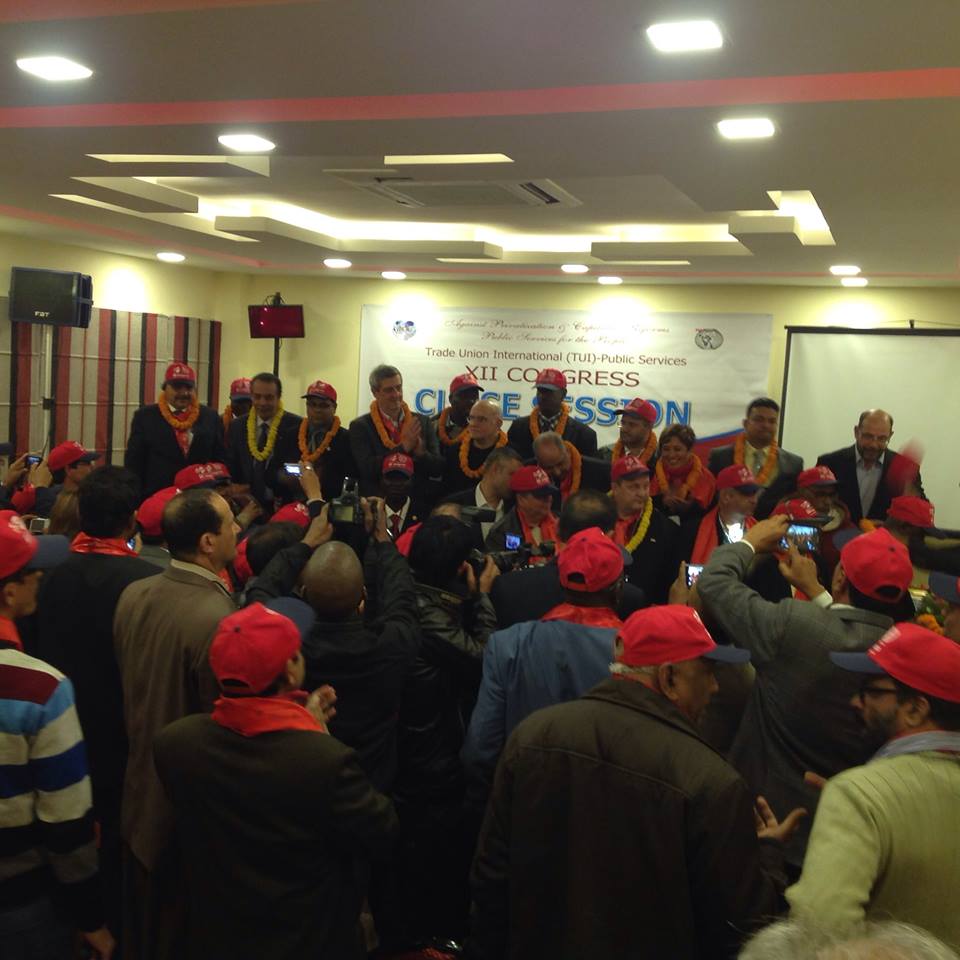 of the WFTU’s International Organization in Public Service workers in the recent international Congress that took placein Kathmandu Nepal on February 13-14,2015.

The Congress was a success and its impact will be very positive in international level;

will be strengthened and active in all continents able to correspond in the contemporary needs of the workers of the sector.

We are sure that it will bring out the class-oriented voice of the public servants and turn it into action.

From our side, we will stand to provide any possible help and assistance you might need and we will support your activities.

Once again congratulations and best luck to your tasks.

I want to express my gratitude to the comrades  during the  XII world congress of the Trade Union International Public service congress  held at Kathmadu, Nepal  from  Feb 13-14, 2015.

I want to thank you for the idea  and your trust in me. I will be honest and work hard for the development of World Federation of Trade Union .

This election not only brought me the opportunity to meet  the new world but will use it to  discuss important WFTU  matters  and also to join our partnership in building pride in WFTU and helping us to make prudent decisions in the finance committee.

Also, I would like to take this opportunity to congratulate everyone who was interested enough in the congress..

Please accept my warm congratulations and also of the members of the Secretariat of the European Regional Office of WFTU for your election at the post of the General Secretary of the TUI Public Services of WFTU.

We are confident that despite the difficulties that the working class is facing today as a result of the capitalist crisis and the neoliberal policies and attacks,   you are ready as always to respond to the duties of this important  post  in the family of the WFTU for the defense of the working class rights.

On behalf of the European Regional Office we assure you that we are always to cooperate with you to strengthen further the TUI Public Services for the benefit of the workers.

I am sending you a greetings and solidarity as a  newly elected General Secretary of TUI-PSEA.

PAME, welcomes the election of USB and you personally as General Secretary of TUI Public Services in its 12 th Congress. On the occasion of your election PAME would like to express its support to the efforts you will make to reconstruct and strengthen the workers’ movement, for the distinctive presence of the class oriented trade unions, for the strengthening and growing of WFTU in Europe and globally.The difficulties in your work are big. The correlation is against you. The brutal attack of capitalism escalates daily; however, faithful to the historic role of the working class, to the unbreakable force of those who produce the wealth, the class trade unions will overcome all obstacles.

The election of USB in this position shows the important role your organisation has played, within the few years of its existence till today, and also the perspective it gives to the movement. It shows the vanguard role of the class trade unions in Europe and especially in Italy, where USB has been the classcounterweight, against the argument of “class collaboration” cultivated by the confederations, who betrayed the values and principles of the working class years ago. Furthermore, using the recent result of the general elections in Greece, such trade union leaderships attempt to drive the workers in supporting either one, or the other way of managing capitalism. They want workers to co-sign the new antiworkers’ measures.

Against such positions, USB and PAME have been side by side on the path of struggle, in the great, militant family of WFTU. We highlight our common demonstration in Rome, at FAO, your speech in May 1 st at the gates of the Halivourgia factory, during the 9month strike of the steelworkers, as well as your recent participation at the National Demonstration of PAME on November 1 st . Dozens are our common actions, press releases, announcements and positions against the barbarity of capitalist exploitation. We are certain that the class connection that unites us will only grow stronger.

PAME, based on the principles of Internationalism and Solidarity, will support your efforts with all possible means