The international meeting "Meditaranean / Southern Europe" is taking place in Marseille in these days.

This is the Pierpaolo Leonardi ( USB international department ) intervention 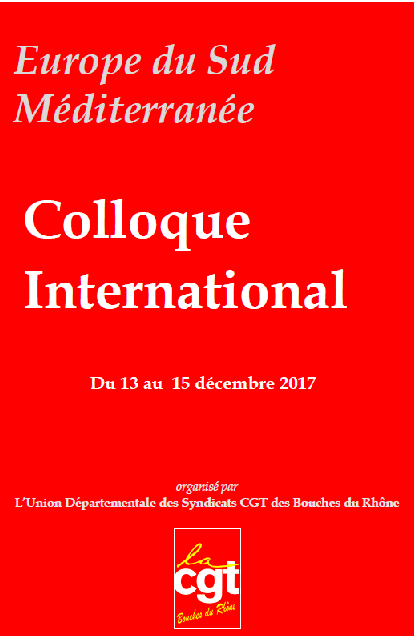 Dear comrades,   On behalf of USB Italy I wish to express the greetings at this very important moment of confrontation, I am sure that the discussion will be useful for the growth of our common initiative in Europe and in the Mediterranean area and therefore to strengthen the role of the World Federation of Trade Union in support of the workers and popular strata of all our countries.

Italian workers and USB are still facing the consequences of the systemic crisis of capital that since 2008 has affected our countries and the responses to the crisis that the Italian government has decided in accordance with the diktat of the European Union, the IMF , the ECB. The situation of the class movement in Italy is not brilliant. The long-standing disappearance from the political scene of political class forces has weakened the front of the struggles that is now kept alive almost only by USB and by some militant political / social organizations.

In terms of current  struggles, USB is strongly committed to the defense and nationalization of the  major strategic companies in the country, in particular the  ILVA (steel production) and Alitalia, it is supporting a tough clash in the logistics sector to impose adequate working conditions and fair wages, for the recruitment of temporary workers operating in all public services in particular in the research sector, usb is with the day laborers and of agricultural workers in general, where tens of thousands of migrants are exploited to the limit of real slavery. We are very busy in the battle for the cancellation of the Jobs Act , the equivalent of the French “ Loi Travail”,  and in the defense of the right to strike that It is again under an hard  attack especially in the transport sector.

While the struggles we are leading make to grow the class oriented trade unionismUSB the italian confederations affiliated to the ITUC are completely in tune with the political and social choices of the European Union and the Italian Government and support  the operations of dismantling of the current welfare  state. This attitude of complete sharing by the CGIL, the CISL and the UIL, however, is producing a break within these confederations. In particular, significant sectors of CGIL, in particular of FIOM (metallurgy) are abandoning their organizations to go with USB. At International level at this time USB is engaged with BDS campaign, to substain Palestinian people and against the decision of Italy and Israel to start the Giro d’Italia from Jerusalem that legitimize The Trump provocation. Within a few decades since its foundation, European Union has established itself as an imperialist pole in competition with other global imperialisms and powers,  contending for our planet.

Despite delays and contradictions, European Union plays already an aggressive hegemonic role both inside and outside its borders, in order to impose the interests of its dominant classes on its competitors, to seize resources, to increase its political and military power as he results of the recent Abidjan Summit between the European Union and the African Union, demonstrates.   The European Union has accelerated the construction of its own industrial military system, tendentially independent of the United States, has strengthened the earliest nucleus of the European army, has increased its military pressure and aggressiveness towards the areas around its borders - the Middle East, North Africa, Central Africa, and the Balkans - contending the control to new regional powers in order to subtract them from the traditional influence of the USA or the new Chinese protagonism and more in general of the BRICS.   EU defines and directs the policies of the States Members through a sort of "automatic pilot", which allows, for example, long periods of government absence, like in Belgium, or for example what is happening during these mounths in Germany, so that political dictates and the choices of the European Union are carried out without any interruptions.

Further evidences, that the European Union is a non-democratic and hostile construction against people's needs and workers.   The European Union is an imperialist pole that cannot be reformed or be transformed. Banks, multinationals, strong powers are destroying the economies and the social rights of weaker countries in order to concentrate wealth, technologies, control centers and resources in a few large European monopolies.

We believe that the only solution is the cracking of the cage of the European Union and the Eurozone, with the construction of a new alliance of countries and peoples of the Euro-Mediterranean area that adopt new social policies independent of the dictates of the Central Bank, the IMF and build new internal and international relations based on justice, solidarity and complementarity, that  leaves NATO out.   The USB is therefore very interested in establishing, within the WFTU, closer and continuous relationships with you also through periodic moments of comparison, struggle and organization on our common goals.