Brief information on May 5 strike in Greece 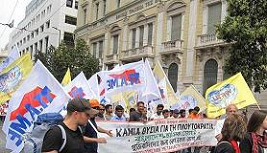 Yesterday, May 5, 2010, trade unions in Greece organized a nationwide general strike. They protested because the socialdemocratic government together with the neoliberals, the IMF and the European Union:

1. Increase the retirement age in five years for women and in three years for men, both public and private sectors.

2. Cut the salaries of public employees by 25% and abolish the collective agreements in the private sector.

3. Liberalize layoffs in the private sector.

5. Increase taxes for all workers.

Yesterday PAME organized large strike demonstrations in all the major cities of the country (68 cities).

In Athens, in the rally of PAME, which was the largest of all, more than 65 000 demonstrators participated. In all cities the strike and the demonstrations were the largest in the last 30 years.

The WFTU participated in the demonstration in Athens with the participation of 1000 economic immigrants from Bangladesh, India, Somalia and the Philippines.

A second demonstration was also held in Athens organized by the reformist unions. When the manifestation of these unions past in front of a private bank branch office, some hooded set fire to the branch and, as a result, three employees of the bank who were in their offices not participating in the strike died in the fire.

Some newspapers in Greece write that the Greek capitalist owner of the bank had blackmailed workers and forced them to work, he had locked the doors to prevent employees from going on strike. This is being investigated to clarify the truth.

The political situation is very complex. The attack against workers is brutal. Workers are resisting. The Greek trade union movement has great rich experience in class struggles. It has a long history. Despite the difficulties it is struggling hard.

Today, in the Parliament begins the debate on the measures imposed by the IMF.

The Communist Party of Greece has announced that it will organize a large rally in Athens on May 15th. They call upon the people across the country to come to Athens by boat, plane, train or on foot. That Saturday on May 15th, the government will face a serious political hit. Many workers and unemployed say "on May 15th we will go to Athens even if they have to swim."